A military conflict over the Taiwan Strait would have a disastrous impact on the global economy. The primary sectors impacted would include container shipping, manufacturing, and semiconductors. But the second-and third-order impacts would be dire and difficult to calculate. Chief among them would be a total decoupling of the U.S. and Chinese economies.

The United States (U.S.) has a public policy of “strategic ambiguity” regarding how it would act in the face of a Chinese invasion of Taiwan. There is no formal U.S. military presence in Taiwan, the U.S. does not hold large-scale military exercises with Taiwan’s military, and there is no formal mutual defense guarantee, but the U.S. supplies Taiwan with weapons and is committed to preserving the current geopolitical status quo.

Japan and Taiwan have close relations. Japan reinterpreted its constitution to allow for “collective self-defense” in 2014 in reaction to China’s rapid military modernization. Starting in 2021, Japanese officials and military planners began to openly state their willingness to protect Taiwan’s sovereignty as they consider an invasion of Taiwan an existential threat to Japan. As recently as 31 August, the Vice President of Japan's ruling Liberal Democratic Party stated that Japan would be likely to join a conflict should China invade Taiwan. 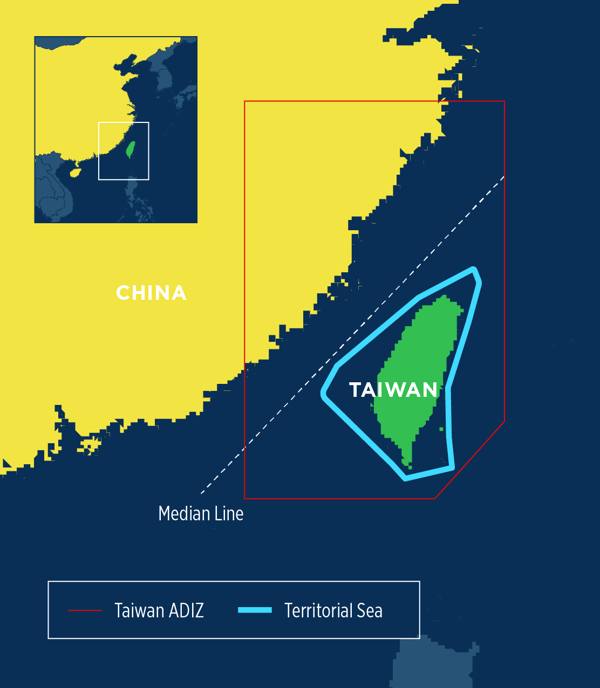 Both the People’s Republic of China (PRC) and the Republic of China (RoC) maintain constitutional claims over the entirety of China, yet only the PRC with 60x the population of Taiwan actively pursues this claim today. China and Taiwan briefly fought twice in the 1950s but until recently, the U.S.-favored balance of power deterred Beijing from further action against Taipei.

The CCP in Beijing views Taiwan as a renegade province and seeks to prevent Taiwanese independence and bring Taipei under its control. In 1979, the PRC made peaceful unification its core policy but in 2005, it updated its anti-secession law to allow for the use of non-peaceful means to protect China’s “territorial integrity” should the possibility of peaceful reunification be exhausted. Beijing has made it clear it will use force to prevent independence and under Xi Jinping, the PRC has become increasingly impatient about “reunification.”

From a legal point of view, since the PRC claims Taiwan, it considers the 12 nautical miles (nm) from the shores of Taiwan to be its “internal waters,” which in turn gives it an additional 12 nm as its territorial waters where it enjoys full sovereignty – it can “prevent [or punish] infringement of its customs, fiscal, immigration or sanitary laws and regulations.” The issue is that China treats its Exclusive Economic Zones (EEZ) as though it is sovereign territory, which the U.S. regularly challenges through freedom of navigation voyages meant to uphold the United Nations Convention on the Law of the Sea (UNCLOS) norm of free passage through EEZs. In addition, China also does not respect Taiwan’s air defense identification zone (ADIZ), creating constant military friction with Taiwan.

Beijing’s bloodless takeover of Hong Kong in 2020 effectively ended the prospect of peaceful reunification with Taiwan, effectively starting the countdown for a non-peaceful solution. An August 2022 survey found that 50 percent of Taiwanese nationals favor independence; whereas, only 12 percent of those polled sought unification with China. Meanwhile, China may already possess the military capacity to invade and conquer Taiwan successfully and there is a consensus that it if not now, by 2027 it will.

China’s assertiveness has also increased in tandem with its new capabilities. Since 2020 Chinese aerial violations of the Davis Line (the median line between the mainland and Taiwan) into Taiwan’s air defense identification zone have increased. Between 1954 and 2020 China only crossed the Davis Line four times. In August 2022 Chinese warplanes made 446 incursions into Taiwan’s ADIZ, compared to 23 over the same time period in 2020. China is normalizing this behavior which desensitizes the Taiwanese armed forces and the public as well as honing its preparation to decapitate the government, military command, and other high-value targets should it decide to invade.

Meanwhile, China’s window to successfully conquer Taiwan – while limiting the possible military and economic costs – is starting to close. The collapse of the Intermediate-Range Nuclear Forces Treaty (INF) in 2019 opened the door for the U.S. – and therefore, its defense partners, including Taiwan, to procure or develop land-based ballistic missiles and cruise missile systems with ranges of over 500km (310m). Estimates indicate that as early as 2025, the U.S. will be able to field and, in turn, provide Taiwan with ground-launched cruise missiles capable of hitting targets deep inside of China from Taiwan. In sufficient numbers, the augmentation of Taiwan’s current arsenal of missiles would radically change the cost-benefit analysis in Beijing surrounding the decision to forcefully take Taiwan, thereby restoring deterrence. This comes at a time when other American partners are also increasing their military spending and some have begun to band together in forums such as the Quadrilateral Security Dialogue (U.S., India, Japan, Australia) and AUKUS (Australia, United Kingdom, U.S.).

At home, China is currently facing serious long-term economic and demographic headwinds. With its slowed productivity growth and ballooning debt, China’s investment-driven growth model is not sustainable, and the regime will soon be heavily burdened by an aging population.

Since the first Taiwan Strait crisis, the U.S. has remained the most important variable in the equation. There has been an implicit policy shift in the U.S. in recent years with regards to Taiwanese sovereignty. There have been more arms sales, high-profile official visits to Taiwan – including that of House Speaker Nancy Pelosi – and President Joe Biden’s full-throated pledge to defend Taiwan during an interview in May 2022. At this point, is almost certain that the U.S. would now enter a conflict should China invade Taiwan.

But what remains to be seen is what hostile military action China can undertake against Taiwan that falls short of an intervention-triggering invasion yet brings it closer to its goal of reunification. In August 2022, China fired multiple missiles near Taiwan for the first time since 1996 in its largest-ever live-fire drills in the area. In doing so, China effectively demonstrated how easily it could blockade Taiwan without starting a major conflict.

Global Guardian is actively supporting global businesses with personnel and assets in Taiwan and China with business resiliency assessments, contingency and emergency response planning, and tabletop exercises. To learn more, click below to contact Global Guardian's 24/7 Operations Center or call us directly at +1 (703) 566-9463.

Memphis, Other Cities Brace for Unrest

Bodycam footage showing the beating death of Tyre Nichols at the hands of five Memphis, TN police officers is expected to be released in the coming days, possibly as early as...

Geopolitics Is Changing the Business Landscape. Companies Cannot Afford to Ignore the Risks. “The war in Ukraine was a wake-up call as to how entire industries can unravel in...

Russia Claims Victory in Battle for Soledar: Now What? "I think even if you could mobilize 300,000 plus people, you're going to utilize them to maintain the terrain that you...