Russia’s invasion of Ukraine has led to dramatic increases in energy costs amid already high global inflation. Russia’s hold on much of Europe’s natural gas supply directly threatens Europe’s energy security. Ukraine and Russia constitute a large portion of global food and metal exports, and further disruption of these supply chains will continue to detrimentally affect the food supply and European manufacturing. 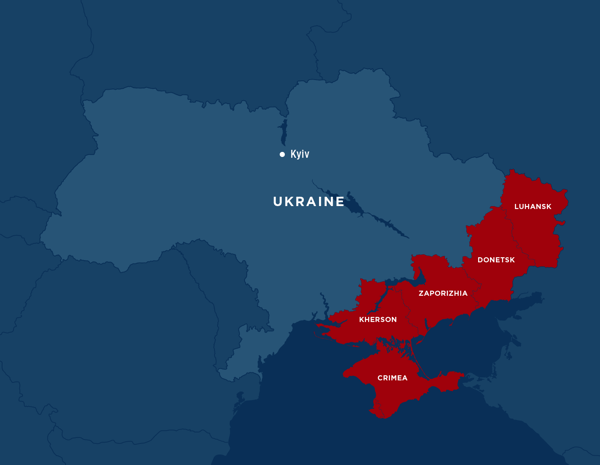 The Luhansk and Donetsk People’s Republics are formerly breakaway, de-facto Kremlin-controlled, statelets that have now been formally annexed into Russia. Russia has used the alleged persecution of Russian speakers in these regions to justify the war and has relied on the locals for manpower.

NATO member states provide billions of dollars in financial aid to Ukraine, as well as advanced armaments, munitions, and training. NATO-provided weapons and intelligence were instrumental in halting the initial Russian advance and giving Ukraine the initiative in its recent counteroffensive.

President Putin sees Ukraine as a key component of both Russian security and the “Russian World.” The 2014 Euromaidan Revolution began to pull Ukraine out of the Russian sphere of influence and into a closer relationship with the West. Putin sees this shift as an existential threat to his regime. In February 2022, Russia attempted to install a pro-Kremlin regime viа a rapid three-pronged invasion. But following its failure to take Kyiv the conflict entered a protracted phase characterized by positional fighting and attrition. Ukraine's counteroffensive has begun a new phase to the conflict.

Russia’s goal is to hold the resource-rich and predominantly ethnically Russian territories of Luhansk, Donetsk, and Crimea to maintain “a foot in the door.” Ukraine’s goals are the full expulsion of Russian and Russian-backed forces from its territory, including the liberation of Crimea.

Ukrainian forces recently conducted a major offensive in the Kharkiv region. Through the effective use of Western-supplied hardware, cooperation between Ukrainian and US intelligence services, and relatively high morale, Ukraine was able to break through Russian lines around Kharkiv. The operation was successful in large part because Ukraine was able to convince Russian military intelligence that the main thrust of the offensive was aimed at Kherson in the south.

In response to the slew of battlefield losses, Putin announced the partial mobilization of up to 300,000 Russian citizens with specialist training and military experience on 21 September, though other accounts suggest the mobilization is much wider. In conjunction with the mobilization, Russia formally annexed Kherson, Zaporizhzhia, Luhansk, and Donetsk oblasts on 30 September following what has been described as sham referenda. Reports of up to 700,000 Russians have fled the country to avoid conscription, and protests against the mobilization have occurred throughout the country.

Ukraine’s counteroffensive demonstrated to Ukraine’s western backers that a supplied and supported Ukrainian military can effectively retake territory. What's more, it also made Russia choose between defending its newly-occupied territory in the east (the Donbas) or the south as it did not have the manpower to repel Ukrainian forces on both fronts. Russia prioritized the south and Ukraine was able to rapidly punch through Russia’s lines in parts of the Donbas. Russia’s current imperative is to prevent Ukraine from crossing the Dnipro River in Kherson before winter and reinforcements arrive.

Global Guardian has evacuated thousands of people since Russia's invasion of Ukraine, including ex-pats, Ukrainian employees, and family members of global businesses. To learn more about our Duty of Care membership and emergency response capabilities, click below to contact Global Guardian's 24/7 Operations Center or call us directly at +1 (703) 566-9463.