On 21 July, the U.S. government gave China 72 hours to close its consulate in Houston, citing Chinese espionage and influence operations. In a tit-for-tat move, Chinese authorities ordered the closure of the U.S. consulate in Chengdu on 24 July. The closure of the Chinese consulate in Houston – which has long drawn FBI counterintelligence scrutiny – follows a 21 July Department of Justice indictment of two Chinese nationals for state-sanctioned hacking of COVID-19 vaccine research. This diplomatic row is the latest development in a series of geopolitical moves as the Trump administration is increasing pressure on China ahead of the November election. 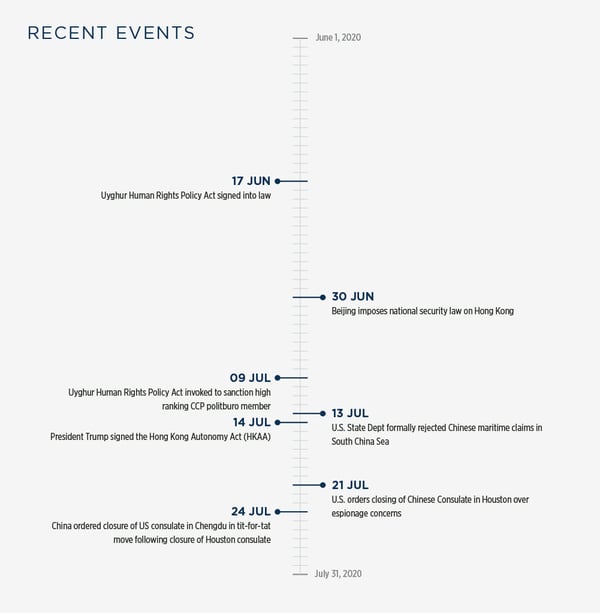 As noted in Global Guardian’s February 2020 World Wide Threat Assessment, Sino-American relations have been deteriorating, trending towards economic decoupling, and fierce competition over future dominance of next generation technologies. The last six weeks have marked a significant acceleration of this general trend. However, the U.S. administration’s responses towards China have been restrained and incremental. The U.S. has stopped short of escalating with China so as not to derail the ongoing phase one trade talks that are expected to resume in August.

With less than 100 days until the U.S. presidential election, we expect President Trump to take further measures against China. The extent of such measures will largely be determined by the fate of the trade negotiations. The outcomes may negatively impact the American business community.

Global Guardian’s cyber-security offerings are designed to keep both corporations and individuals ahead of cyber threats and malicious actors. Our service offering includes expert baseline assessments, unparalleled real-time network monitoring and analysis with a focus on the end user. In addition, if you are looking for maximal VPN protection, we recommend Global Guardian’s VPN services for corporate, residential, and personal devices. Unlike other premium VPNs, Global Guardian’s VPN service utilizes our custom threat intelligence feed to actively monitor your VPN tunnel for malicious activity. Global Guardian’s VPN in conjunction with our tailored cyber security solutions provides our clients with the ultimate defense against today’s cyber threats.