The drug war in Mexico is one of the most violent conflicts on the planet with cartel activity permeating through many levels of the Mexican economy and society. Cartel conflicts continue to drive violence across Mexico, including tourist areas previously less affected, such as Cancun and Puerto Vallarta. Inter-cartel violence can impact and disrupt travel, worksites, and supply chains.

Cartel Jalisco Nuevo Generacion (CJNG), based out of Jalisco state, is the emergent power in Mexico, and it controls or fights for territory in Guanajuato, Michoacan, Baja California, Mexico, Jalisco, Chihuahua, and Guerrero, among other locations across the country. The CJNG engages in drug trafficking (primarily synthetics, including methamphetamine and fentanyl), kidnapping, extortion (particularly of avocado & lime farmers), oil pipeline tapping, and other criminal activities in the Tierra Caliente region.

Sinaloa Cartel (CDS) once the dominant drug trafficking organization in Mexico, has faced challenges and challengers to its primacy in the last several years, notably from the CJNG but also from splintering factions and subsequent in-fighting. The CDS has reportedly broken into several major factions: one led by Ismael “El Mayo” Lambada, El Chapo’s number two; another by the brother of El Chapo, Aurelio “El Guano” Guzmán Loera; and another led by El Chapo’s four sons, known collectively as “Los Chapitos.” Fighting amongst these groups and the CJNG has contributed to much of the violence in Mexico, particularly in the west and northwest of the country.

The current criminal landscape in Mexico is driven largely by the battle between the Cartel Jalisco Nuevo Generacion (CJNG) and the Sinaloa Cartel (CDS), though three other major transnational criminal organizations (TCOs), Los Zetas, Gulf Cartel, and Juarez Cartel, all contribute to high levels of violence.

The CJNG, is responsible for much of the uptick in violence over the last several years as it acts on its expansionist goals. The above-mentioned seven states accounted for over half of the national total of homicides in the first six months of the year. The leader of the CJNG, Nemesio “El Mencho” Oseguera Cervantes, is the most wanted man in Mexico, with a $10,000,000 U.S. Drug Enforcement Agency (DEA) bounty on his head. Unlike the leader of CDS, Joaquin “El Chapo” Guzman, El Mencho has managed to escape capture by federal authorities. His son “El Menchito” was not so lucky; however, in a show of brazen force, the CJNG killed the federal judge overseeing his case who had approved El Menchito’s extradition to the U.S. 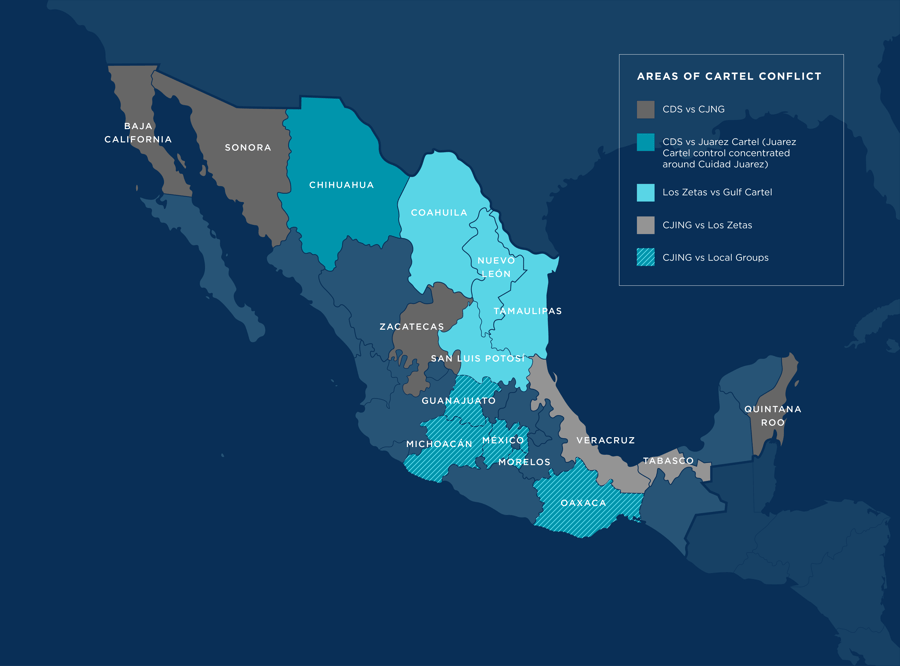 August of 2022 saw a significant increase in cartel-related violence across multiple areas of Mexico, including in Tijuana, Ciudad Juarez, Guanajuato, and Guadalajara. Overnight on 09 August, violence erupted in Guadalajara and Guanajuato after the arrest of high-ranking CJNG member "El Doble R" on 09 August. Cartel members clashed with security forces, set fire to at least 25 OXXO convenience stores, and set several vehicles ablaze to prevent the passage of security forces. At least three people were killed, 19 vehicles destroyed, and 11 suspects arrested.

On 11 August, at least 10 people were killed in Ciudad Juárez after suspected cartel members attacked multiple fast-food restaurants and convenience stores. The attacks were linked to deadly gang clashes that occurred at a Ciudad Juárez prison (Cereso No. 3) earlier in the day. Overnight on 12 August, violence broke out across northern Baja California, including in Tijuana, Mexicali, Ensenada, and Rosarito. Multiple vehicles, including buses and taxis, were car-jacked and set ablaze, forming burning blockades. Multiple convenience stores were targeted for arson as well in an effort to cause chaos and divert emergency services. It is believed that CJNG members carried out the blockades in response to the arrest of "El Doble R" in Guadalajara several days before. At least 17 people were arrested in connection with the burning blockades.

As a result of the violence in Tijuana, the Mexican Army sent 350 soldiers and National Guard personnel to the city to be deployed across Baja California state to help shore up security. A similar deployment occurred in the Quintana Roo area last year following an uptick in cartel violence in Cancun, Tulum, Playa del Carmen, and Cozumel.

Further violence can be expected following future arrests of any high-ranking cartel members; however, the Mexican government may be less willing than ever to arrest cartel leadership following the events of August in Guadalajara, Tijuana, and elsewhere. Similarly, in 2019, one of El Chapo’s sons, a leader of “Los Chapitos”, was arrested. His arrest caused the CDS to mobilize a large force to wreak havoc on the Sinaloa capital of Culiacan. Security forces released him after orders came down from high-ranking government officials. This highlights not just the power of violence, but the power of corruption and influence, a hallmark of the CDS.

The Global Guardian team is standing by to support your security requirements in Mexico. To learn more about our Duty of Care membership, as well as secure car and driver, custom intelligence reporting, and emergency response services, click below to contact Global Guardian's 24/7 Operations Center or call us directly at +1 (703) 566-9463.