President Trump warned the American public that the next two weeks could be "very painful" as cases continue to grow across the country.

There were 24,000 new cases recorded in the last day. Dr. Deborah Birx, Coronavirus Response Coordinator for the White House Coronavirus Task Force, released models that predict 100,000-240,000 people could die in the U.S. from COVID-19 over the coming months. New York, New Jersey, California, Michigan, and Florida have the most confirmed cases, respectively.

In NYC, more than 2,000 nurses, 500 paramedics and emergency medical technicians, and 250 ambulances were converging on the city from across the country. This is in addition to the USNS Mercy, a Navy hospital ship that arrived in New York City harbor to assist with non-COVID-19 cases so that hospitals in the city can dedicate all their resources to treating COVID-19 patients.

In Virginia, Governor Ralph Northam issued one of the most stringent stay-at-home orders in the country. It extends to 10 June, far longer than most other states and may be indicative of the true length of extreme social distancing and lockdown measures needed to halt the spread of COVID-19. 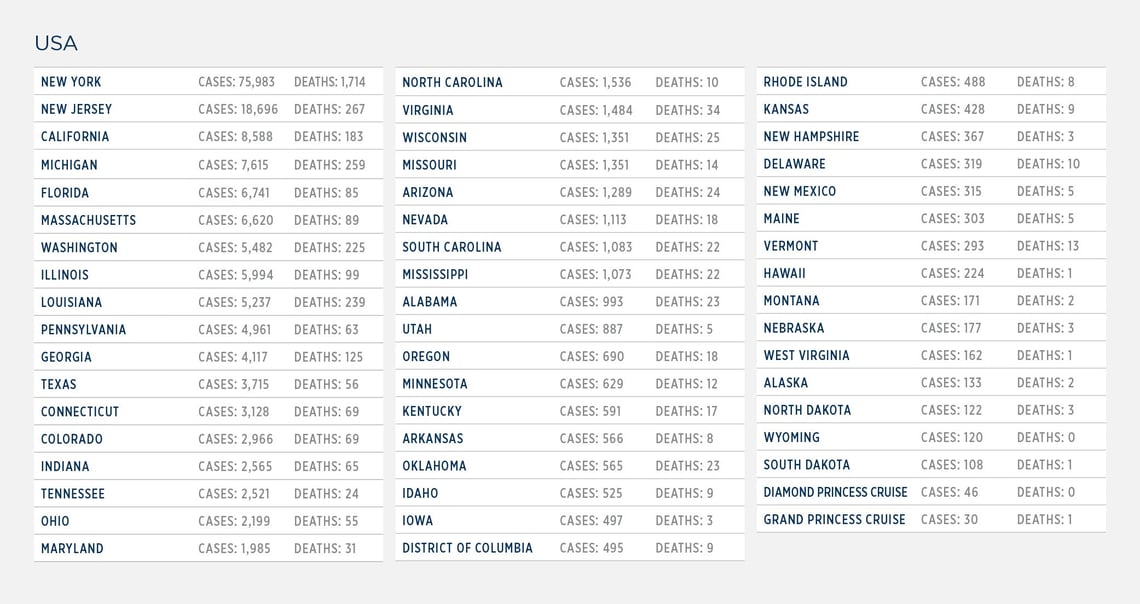 The focus in the U.S. is shifting to shelter-in-place measures to limit the spread of COVID-19, with ramping up of production of ventilators and personal protective equipment such as masks and gowns. Working from home, closing of schools, and social distancing in public are all part of an effort to "flatten the curve" of cases to prevent the sudden overwhelming of the country's healthcare system.

The outlook is cautiously optimistic as several European countries start to see a flattening of the curve in new cases 14-20 days after instituting aggressive lockdown measures. Italy is starting to see positive effects on case growth after more than 20 days of nationwide lockdown and quarantine.