At approximately 1100 local time, sniper fire was reported against members and supporters of Lebanon’s Shia Hezbollah and the Amal Movement near the Palace of Justice in the Tayouneh area of Beirut, southeast of the city center.

Armed Hezbollah and the Amal demonstrators gathered to protest Judge Tarek Bitar's Beirut Blast probe and call for his removal, alleging that he is unfairly targeting Shiite ministers in his investigation. Hezbollah members responded to the sniper fire with small arms and RPG fire. So far, skirmishes in the greater Beirut area have resulted in six fatalities and over 50 injuries. Clashes were reported in Tayounneh, Adlieh, Choueifet, Kfarshima, Ain er Rummeneh, and the main highway was blocked in Chtoura and Cola, south Beirut.

During the unrest, the Lebanese military declared a state of emergency and deployed in large numbers, and threatened to open fire on any armed individuals. Hezbollah has accused the Christian Lebanese Forces party of staging the attack, though evidence has yet to be provided. The situation has since subsided, although tensions remain high.

The Beirut Blast probe has been a political lightning rod amid the backdrop of Lebanon’s rapidly deteriorating economy and social stability. Since late 2019, Lebanon has experienced hyperinflation that has had a devastating impact on the lower and middle classes and resulted in both human and capital flight. With mounting fuel, electrical, health, and financial crises, sectarian tensions are running high given that Lebanon’s political system runs along sectarian lines.

Today’s attack can be seen as a direct message to Hezbollah and Amal that predominantly Christian areas of Beirut are “off-limits” to armed militants and that further attempts of stonewalling the Beirut Blast probe will not be tolerated. Last year’s explosion disproportionally impacted Beirut’s Christian community and many in the community blame Hezbollah for the explosion.

Global Guardian is closely monitoring the situation for developments. While the situation is highly fluid, further sectarian violence is not in the interest of any actor. Yet, further overt attempts at political intimidation will result in unrest and possibly further violence. 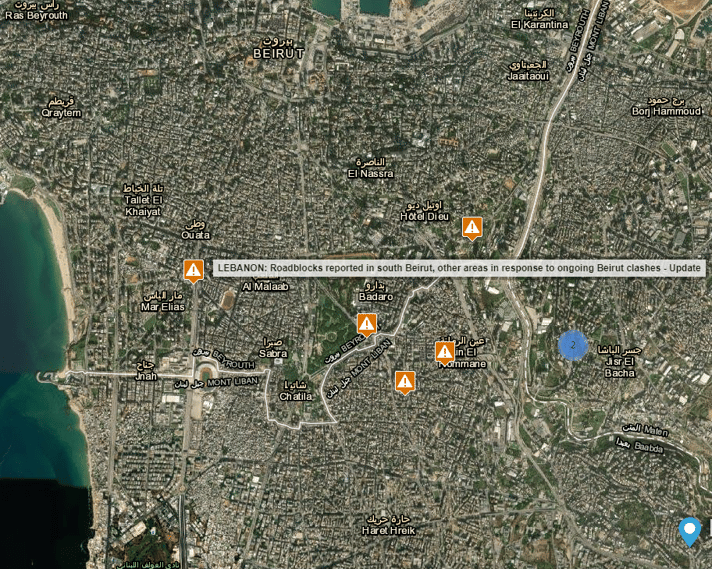 Contact Global Guardian's 24/7 Operations Center for assistance with evacuations, emergency response, or ongoing intelligence support related to this incident. Click below to contact us today or call us directly at 703.566.9463.