It’s Never Too Early to Start Preparing for a Crisis

Most crises follow a similar pattern, so why are corporations slow to respond? 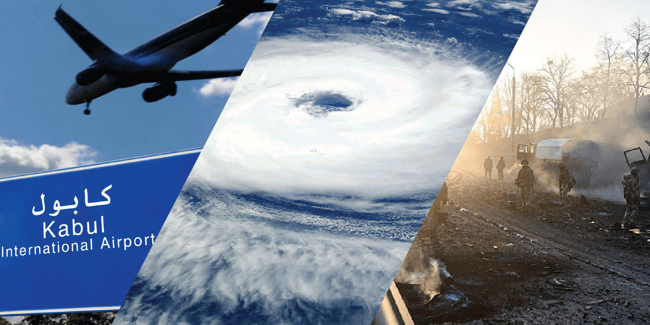 A month before the Russian invasion, Global Guardian alerted its clients in Ukraine to the threat and urged them to consider plans to evacuate their people and safeguard their assets. Some took the warning seriously, while others dismissed it believing Russia would never attack. The rest, as they say, is history.

Whether it is a natural disaster (for example, the back-to-back hurricanes that struck the Caribbean in 2017) or the sudden collapse of a government (as was the case in Afghanistan last summer) or Russia’s invasion of Ukraine, every crisis invariably follows a similar template. Nevertheless, corporate leaders are often surprised and unprepared – but why?

A Loss of Connectivity

One of the first things to be impacted in a crisis is the freedom of movement. In the days leading up to Russia’s invasion of Ukraine, commercial airline connectivity was severed as foreign carriers avoided contested airspace. Insurance companies also refused to cover operations of commercial carriers in Ukrainian airspace as war loomed. In the absence of commercial aircraft, the options for evacuating people become severely reduced. Here’s my takeaway: don’t count on commercial aviation to evacuate your people during a crisis.

"Here’s my takeaway: don’t count on commercial aviation to evacuate your people during a crisis."

It's not just commercial aircraft that are affected. Road, rail, and sea transport suffer disruptions, too. A trip that would typically take a few hours by road can end up taking several days in a war zone. Global Guardian experienced this challenge in Afghanistan from where we evacuated our duty of care clients after Ashraf Ghani’s government collapsed overnight in August of last year.

Along with transportation, communication links are also impacted. You have to assume you are not going to have internet, text, or cellular connectivity during a terrorist attack, a natural disaster, or a war.

The Limitations of Insurance Plans

Desperate to protect their people and assets in a crisis, HR managers will belatedly look at the fine print of their company insurance policies and assess the capabilities of their duty of care providers often to realize that most plans do not cover natural disasters, wars, or even a global pandemic, and that not all duty of care providers have assets pre-positioned around the world or the ability to respond to a crisis within hours.

Insurance policies have written out the customer. Yet most of us believe that since we have an insurance plan we are covered for any eventuality. In fact, you are actually not covered for very much at all.

"Insurance policies have written out the customer. Yet most of us believe that since we have an insurance plan we are covered for any eventuality. In fact, you are actually not covered for very much at all."

When COVID-19 hit, I was stunned by how many people were surprised that they were not covered by their insurance providers. If you ask the hard questions of your insurance and duty of care providers well before a crisis erupts, the potential for surprise is greatly diminished. However, most people do not read their policies in detail, and it comes back to bite them during a crisis.

Corporate leaders need to understand what duty of care, insurance providers, and emergency responders can do for them in a crisis, but, equally important, what they cannot do. Once they understand that, they should fill the gaps.

After they realize they are pretty much on their own, corporate leaders responding to a crisis frantically seek a safe zone for their employees, but there are very few modes of transport left to get there. Everyone is trying to get their hands on the few resources that are available. Unless you have those assets pre-positioned well before a crisis or work with a duty of care provider that has local resources, you are already behind.

Lead time for pre-positioning assets varies depending on the nature of the crisis. In the case of Russia’s invasion of Ukraine, we had about 40 days of a march to war as Russia amassed its troops on the border with Ukraine and advertised its plans to invade its western neighbor. On the other hand, in the case of a natural disaster, the window is typically much smaller. Companies may only have a few days to get their people and assets out of harm’s way. In incidents like terrorist attacks, coups, earthquakes, and tsunamis the opportunity to prepare is virtually nonexistent because there is very little warning preceding these events. Regardless of whether an incident comes with early warning, it is never too soon to pre-position assets that could make the difference between life and death in a crisis.

"Regardless of whether an incident comes with early warning, it is never too soon to pre-position assets that could make the difference between life and death in a crisis."

Global Guardian has teams and assets in more than 130 countries. This gives us the ability to respond quickly in the event of a crisis through our local networks and professionally trained personnel.

Preparing for a Crisis

No one saw Pearl Harbor coming and no one predicted hijacked commercial aircraft would be used as missiles on 9/11. I believe that the mindset in corporate America needs to be: anything is possible.

Companies that have a large global footprint should have a very specific plan for each country in which they are operating. Companies that have a relatively small footprint but a large portion of their workforce that travels should have a global plan even though they don’t have global infrastructure because their dispersed work force will inevitably get caught up in a crisis. Whether you have people and infrastructure in foreign countries or a high-volume traveler work force, you have to be prepared.

"But even one employee caught up in a risky situation is one too many. Companies owe it to each and every employee to provide them with duty of care; that means taking care of them when they are on the road."

But even one employee caught up in a risky situation is one too many. Companies owe it to each and every employee to provide them with duty of care; that means taking care of them when they are on the road.

A Formula for Success

The formula for minimizing the impact of a crisis is straightforward and can be focused on three main fundamentals: organization, communication, and execution.

Most companies that fail to respond adequately to a crisis do so primarily because they have not prioritized crisis preparedness. They may have not planned for or exercised plans for a crisis. They may not believe they will be impacted by a crisis. Others may simply ignore warnings, as was the case in Ukraine. Still others may lack a thorough understanding of what their insurance policies cover or a duty of care provider that can provide real outcomes.

Bottom line: no one knows what global disruption is coming next, so it isn't productive to try and predict the future. What we do know is that global disruptions will continue to happen several times a year and a lack of preparedness in the face of crises can be costly. The truth is, it doesn’t have to be.

Find out how our team can support your security needs. For assistance, call our 24/7 Operations Center at 703.566.9463 or complete the form below.