On 01 August Myanmar’s de facto leader, Senior General Min Aung Hlaing, declared himself prime minister in announcing a new caretaker government. Hlaing pledged to hold elections in August 2023, after previously announcing in February that elections would be held in February 2022. This announcement comes six months to the day after the military (Tatmadaw) coup against the newly elected civilian government on 01 February after claiming “voter fraud”, an allegation that has not been reliably substantiated. Since the February coup, Myanmar has been plagued by violence and instability. Over 950 people have been killed and over 7000 people have been arrested, including Aung San Suu Kyi and other senior civilian politicians.

By setting a new election date and rebranding itself as a caretaker government, the ruling junta is attempting to gain more legitimacy as it signals its permanence to both its own people and the international community. This move is also meant to dissuade more Burmese from joining the civil disobedience movement (CDM) who have since formed a National Unity Government (NUG), a shadow government in exile.

In May, the NUG formed the Peoples Defense Force (PDF), which the NUG envisions as a precursor to a federal army that includes Myanmar’s various ethnic armed organization (EAOs) fighting alongside Kyi’s National League for Democracy (NLD) party and anti-coup opposition from the country’s majority Bamar heartland (the Bamar comprise over 60 percent of the population and make up the entirety of the ruling elite and military brass).

On 21 May, citing alleged widespread voter fraud, Myanmar’s military-controlled elections commission head made a speech advocating to abolish Aung San Suu Kyi’s popular NLD party. While the abolition of the NLD has not been formalized, it is likely that the junta will move to ban the NLD ahead of the 2023 elections. Such a move would give a major boost to the NUG and the opposition in the short term, but it would also end the prospects of transition back to civilian rule.

As demonstrations, bombings of government administrative offices, and military crackdowns continue in the heartland, the fighting between the Tatmadaw and certain EAOs continue – primarily over jade, rare earth metals, and illicit narcotics production and smuggling – in the periphery with no end in sight. Myanmar is now on a violent path towards either civil war, extreme repression, or state collapse. Meanwhile, the humanitarian situation is continuing to spiral downward as the economy grinds to a halt and COVID-19 overwhelms Myanmar’s already poor medical infrastructure. Myanmar’s future will be contingent on:

1) The durability of the Tatmadaw; and

2) The degree of unity between the PDF and the EAOs

As an institution, the Tatmadaw has proven its durability over the years having survived years of international sanctions and six decades of internal conflict and uprisings. Militarily, the Tatmadaw boasts both a quantitative and qualitative edge over its opposition, receiving military hardware from Russia and electronic surveillance equipment and training from China. It remains to be seen if the country’s present course will be the downfall of the Tatmadaw.

The only hope for the shadow National Unity Government is to join ranks with Myanmar’s various EAOs and for the EAOs to work in concert to create a truly federal army capable of confronting the Tatmadaw. And while the Kachin Independence Army (KIA) and Karen National Union (KNU) have trained and helped arm the PDF, the notion of PDF-EAO or inter-EAO cooperation is easier said than done. Given several generations of enmity and distrust between Myanmar’s ethnic groups and the majority Bamar, who comprise the PDF and opposition to the Tatmadaw, the integration of the EAOs into a federal army is by no means a forgone conclusion. 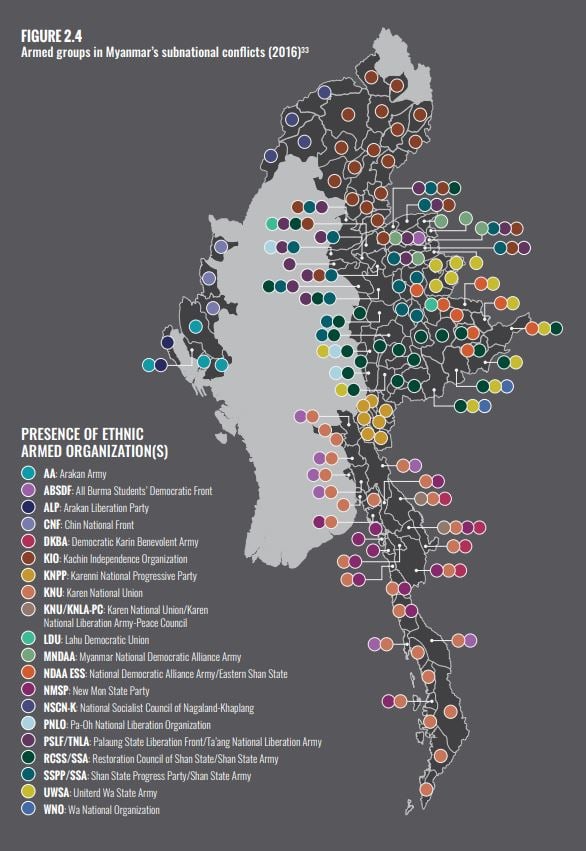 Ultimately, it remains to be seen how this story will play out. However, in the short term, we expect the increasingly violent civil disobedience movement and military crackdowns to continue in the heartland’s townships, while the low-intensity insurgency will continue in the country’s periphery.

As the situation unfolds, Global Guardian continues to actively support clients with their security needs. If you or someone you know is in need of support, please contact Global Guardian’s 24/7 Operations Center by clicking below or calling +1 (703) 566-9463.

COUNTERTERRORISM IN THE PAST AND PRESENT: Q&A WITH KEY PLAYERS

"A person, whether an HVE or a DVE, who has a grievance, feels disenfranchised, and is looking for...

On Saturday, 18 September, 2021, upwards of 700 people will return to the U.S. Capitol to rally in support of defendants charged in connection with the January...