Team Training – What to do if you hear a gunshot?

The recent attacks in Midland–Odessa and in El Paso, Texas as well as the attack in Dayton, Ohio all remind us of the prevalence and lethality of mass shooting incidents in the United States. The Department of Homeland Security defines an active shooter as: “An individual actively engaged in killing or attempting to kill people in a confined and populated area; in most cases, active shooters use firearms(s) and there is no pattern or method to their selection of victims.” By conservative estimates, there have been over 115 mass shooting incidents in America since 1982.1 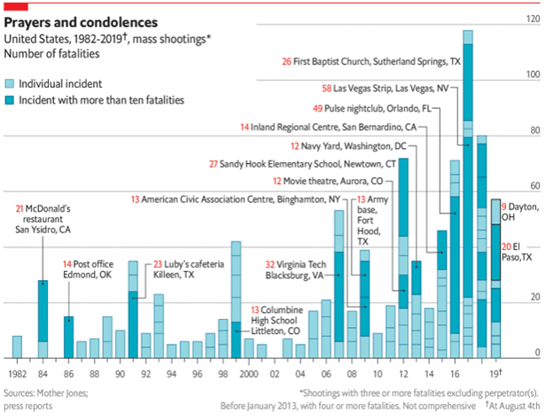 The rising lethality of mass shootings in recent years is of increasing concern. One of the key factors driving the lethality of mass shootings is the asymmetry between the preparedness of the victims and the will of the assailants. According to the FBI, attacks typically involve significant planning: 77 percent of attacks took over a week of planning and 24 percent of active shooters (who are 18 and older) have undergone military training. On average, it takes approximately ten minutes for law enforcement to arrive on scene to intervene, while most attacks end in less than five minutes. This means that in order to survive, individuals must be prepared to react promptly and properly.

Here, Global Guardian outlines the steps that you can take to help you survive an active shooter incident.

1) Be Proactive: Know Your Surroundings

Whether you are sitting at your office desk, going grocery shopping with your family, or sitting in a movie theater, situational awareness can help you make life-saving decisions. Active shooter situations are chaotic and rapidly developing. More than not, extreme stress can make it difficult to process information and make sound decisions. The more time you take to to act, the more time the shooter has to target you. Time is not your friend. A basic knowledge and understanding of your surroundings and a familiarity of the warning signs will help decrease reaction time and enable you to act more effectively.

Keep the following in mind when in public:

This makes all the more important to properly distinguish the sound of actual gunfire. While the sound of gunfire can vary based on the caliber and type of weapon and the acoustic environment (indoors or outside), one striking difference between gunshots and similar noises is that gunshots often have a deliberate cadence. As a general precautionary measure, we recommend against wearing noise-cancelling or over-the-ear head phones in public. Instead use ear pods, leaving one of your ears free to listen to your surroundings.

So, you think you heard a shot…now what? The first thing anyone should do when faced with a potential active shooter scenario is to find cover and assess the situation. Take a second or two to process the situation and ask yourself the following questions:

It is quite difficult to distinguish with absolute certainty a gunshot from similar sounds. But cool-headed rationality can help. Take a quick look around you. Are there any other objects or machines that produce loud popping sounds? Are you close enough to a street to hear a car backfire or are you near an active construction zone? Were the popping sounds you heard in  extremely quick succession (like a firecracker chain) or did they sound more methodical? Did you notice anything suspicious about a colleague or a passerby? Finally, screams and sounds of hysteria are important signs that you indeed heard a gunshot.

Locating the shooter will determine whether you should:  Evacuate  |  Shelter  |  Defend

You’ve taken cover and now it’s time to act quickly and decisively. But be careful not to panic and follow others by default.  From Paris to Christchurch, we have seen that poor decisions mixed with a herd mentality can be devastating. Based on where the shooter is, you should:

When escape has been ruled out, take shelter. Taking cover or finding concealment can make you a more difficult target. The idea here is to buy as much time as possible prior to the arrival of the first responders. Make yourself difficult to find and, if possible, block the shooter’s points of entry. Simply locking a door; however, is not enough. When sheltering, one should barricade the room, turn off the lights (if alone), gather potential weapons, and call the authorities (landlines are easier to track). If you are with others, divide these tasks and prepare to jointly attack the shooter if he or she breaches your place of shelter. Also, be as quiet as possible and mute all electronic devices. 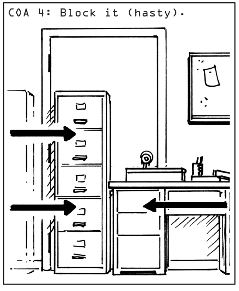 After you have barricaded all points of entry, find cover – any object capable of stopping bullets to hide behind. Objects with layers of materials offer more ballistic protection. If there is no cover available, find shelter – something that cannot inherently stop bullets, but can shield you from sight. Hide behind anything that puts you out of the shooters direct line of sight and stay low to the ground. When taking shelter, one must be mentally prepared to engage the shooter.

Engaging the shooter is your last resort and should only be attempted if you are, or will soon be, entering the shooter’s line of sight. When face-to-face with the shooter, disrupting the shooter will do more to promote your survival than remaining passive. Use any means at your disposal. If you are alone, surprise the shooter and pounce on him or her with any weapon you have. If you are in a group, use your numbers to your collective advantage: buy yourselves time by moving around, generating noise and throwing objects to confuse the shooter. Then, as a group, charge. Your primary goal should be to separate the gun from the shooter or at least to move the muzzle of the weapon away from you and everyone else. Fight to survive. Go for the eyes and neck, and if the assailant is a man, kick him in the groin. No matter what you do, do it vigorously and do not stop fighting until there is no longer a threat. Your life and the lives of others are on the line.

It is important to remember that active shooter events are not over until they are over. If you see or hear law enforcement officers entering the premises while the assailant is still at large, don’t leave your shelter or stop fighting until you are certain that the threat has passed. If an officer approaches, it is vital for you to demonstrate that you are not a threat. Keep hands raised and visible and don’t make any sudden movements or yell. The primary goal of first responders is to neutralize the threat. They will not stop to administer medical aid until the situation permits. You should understand that a second wave of officers and emergency medical personal will follow the initial response team.

[1] This number is from from The Mother Jones data set. This data set was chosen to better reflect reality of the active shooter threat as it omits shootings that are related to other crimes.