The latest updates and announcements from Global Guardian

On 25 July 2022, Taiwan commenced its semi-annual military drill simulating a Chinese invasion of its shores. Tensions across the Taiwan Strait are high after it was leaked that the United States (U.S.) House Speaker Nancy Pelosi plans on traveling to Taiwan in August. Given Russia's invasion of Ukraine, the threat to Taiwan posed by China no longer seems so distant and low probability. A conflict over Taiwan now represents the highest impact downside risk to businesses operating in Asia and to the global economy writ large.

Beijing considers self-ruled Taiwan to be a renegade province and has always maintained its right to use force to reunify. China has historical, economic, and geostrategic imperatives for controlling Taiwan. After witnessing China’s crushing of democracy in Hong Kong, reneging on its “one country, two systems” policy, the Taiwanese people’s desire to unify with the mainland has reached all-time lows – a mere two percent in 2022 polling. The prospects of peaceful unification are all but dead.

China has made generating the military capability to invade Taiwan a decade-long focus, producing some 200 advanced J-16 fighter jets and J-20 stealth jets and building a naval fleet larger than the American Navy in the greatest military build-up since WWII. In lockstep, Beijing has also produced robust anti-access/area denial capabilities designed to prevent Washington from being able to come to Taipei’s defense.

Counter to popular belief, China’s window for action is closing for demographic, economic, and military reasons. In addition, its neighbors have increased their military spending, and some have begun to band together in forums such as the Quadrilateral Security Dialogue (U.S., India, Japan, Australia) and AUKUS (Australia, United Kingdom, U.S.). Estimates from both Taiwan and the U.S. indicate that China may make its move before 2027 when it celebrates the 100th anniversary of the founding of China’s People’s Liberation Army (PLA). Though circumstances may accelerate or decelerate Beijing’s plans.

The proposed trip by Speaker Pelosi would be the first trip by a U.S. official of her rank in 25 years against a very different geopolitical backdrop than that of 1997. The potential Pelosi trip puts the U.S. in a dangerous catch-22 situation vis a vis the Chinese Communist Party. The trip comes as President Xi is preparing to break conventions and seek a third term at the ruling Communist Party's 20th congress this fall, and the American mid-term election season heats up.

Should the trip go ahead there will be pressure on all sides to demonstrate resolve without taking unnecessary escalatory risks. Yet there is always the potential for miscalculation and human error.

END_OF_DOCUMENT_TOKEN_TO_BE_REPLACED 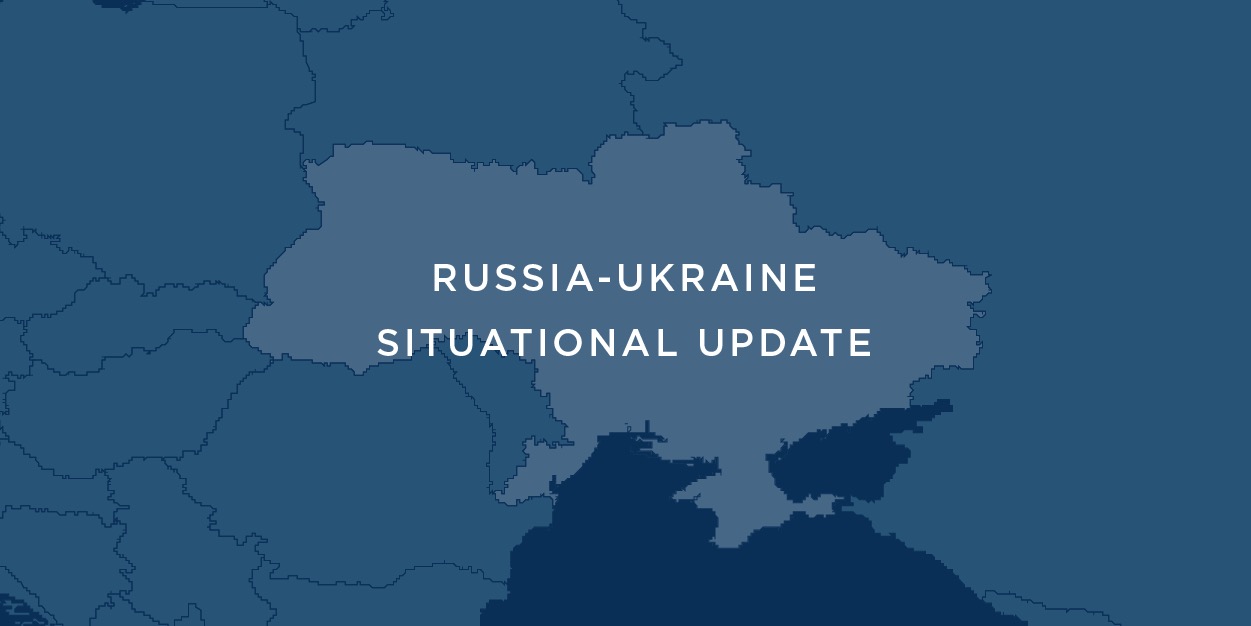 After Russian forces secured Lysychansk—marking the completion of its capture of the Luhansk oblast—Russia paused from 04 July to 16 July to regroup and reconstitute its forces. The slow-moving offensive in Donetsk has resumed, yet the Donbas (Luhansk and Donetsk oblasts) is no longer the center of gravity of the conflict.

END_OF_DOCUMENT_TOKEN_TO_BE_REPLACED

On 24 June, the United States Supreme Court (SCOTUS) ruled on the Dobbs v. Jackson Women’s Health Organization case, siding with Dobbs (the state of Mississippi). In doing so, SCOTUS overturned Roe v. Wade (federally guaranteed constitutional right to abortion access) and placed the issue in the hands of state legislatures. The ruling on this highly polarizing socio-political issue comes ahead of the November mid-term elections and will be leveraged politically. Protests by pro-choice activists and counter-protesters are likely to occur in major cities across the U.S.

While these protests will likely remain peaceful, some could turn violent as bad actors—lone wolves and domestic extremist groups—seek to take advantage of the situation. There is an increased risk of vandalism and violence against churches, abortion facilities, and pharmaceutical sites.

END_OF_DOCUMENT_TOKEN_TO_BE_REPLACED

On 18 June, Lithuania began to impose a ground transit ban on EU-sanctioned Russian goods (steel, wood, coal, oil products, heavy machinery, luxury goods, amongst others) coming from Belarus to Kaliningrad, effectively cutting off the exclave from the rest of Russia. On 21 June, Moscow warned that Lithuania will face consequences "in the near future" unless it allows the trains to pass. The only remaining transit route now is by way of the sea through international waters since Russian planes are banned from EU airspace. Russia has few meaningful response options that both fall short of triggering an escalation with NATO and alleviating the strain on its Baltic Oblast.

END_OF_DOCUMENT_TOKEN_TO_BE_REPLACED

Russian forces continue to make incremental progress in the east under the cover of overwhelming artillery barrages. The main fighting is concentrated around the cities of Severodonetsk and Lysychansk in Ukraine’s eastern Luhansk oblast. Overall, the war has slowed and morphed into an artillery slogfest in the Donbas as Russia has changed its tactics. It is unclear how much longer Ukrainian forces will hold their positions before retreating in Luhansk.

END_OF_DOCUMENT_TOKEN_TO_BE_REPLACED

Few developments occurred along the front in Ukraine as officials inside of Russia again downsized ambitious goals to push entrenched Ukrainian forces out of the Donbas. Russian leadership has begun to justify long-term conflict and occupation in public statements, potentially preparing for some degree of forced mobilization to replace exhausted forces.

END_OF_DOCUMENT_TOKEN_TO_BE_REPLACED

Russia has stepped up missile strikes against Ukraine’s port city of Odesa in the west as the Ukrainian counteroffensive near Kharkiv successfully pushed Russian forces back to the border in the northeast. Elsewhere along the front, Russian troops remained mired in a stalemate, unable to encircle the Ukrainian defense.

Meanwhile, Russia’s Victory Day celebration on 09 May did not turn out to mark a pivotal moment for Russia’s war against Ukraine. Contrary to expectations, Russian president Putin’s annual speech:

However, Putin’s speech—while covering familiar themes—also did not signal interest in a short-term end to the war, nor did it exclude the possibility of general mobilization in the near future. Instead, several points sought to increase volunteers in the military and inflate the threat posed by Ukraine:

Outside of Russia, US intelligence alleged on 10 May that Putin is planning for a long war, hoping to outlast US and European support for Ukraine. In this scenario, martial law in Russia to support the war effort is likely given the current degradation of Russia’s standing force.

Still, Russia’s existing logistics issues would be further complicated by expanding its force size—a difficult task that cannot be accomplished in the short-term. Training new troops would take a minimum of nine months and reducing training time to push infantry out faster would be catastrophic against a well-trained Ukrainian defense.

Russian president Putin is expected to make a major announcement on 09 May to mark Russia’s annual celebration of Victory Day. As the commemoration of Russia’s victory over Nazi Germany in 1945, Victory Day 2022 is certain to acknowledge Russia’s “denazification” of Ukraine.

Some analysts fear that Putin will use the moment to formally declare war on Ukraine. This would allow Russia to issue a mass mobilization of forces to overwhelm Ukraine’s defenses with fresh soldiers. However, there are several reasons why this is unlikely to occur:

On the contrary, Putin is more likely to announce victory in the second phase of Russia’s “special operation” regardless of the situation on the ground. Russia will signal its intention to defend captured territory from falling back into the hands of “fascists” while seeking a satisfactory, if temporary, end to Ukrainian counter-offensives.

END_OF_DOCUMENT_TOKEN_TO_BE_REPLACED

Explosions in Transnistria Underscore Russia's Reach Beyond the Front Lines

The newest phase in Russia’s invasion of Ukraine continues to take shape as Russian troops south of Izyum made slow but steady progress toward Slovyansk. Elsewhere, explosions rocked Transnistria—a pro-Russian breakaway state within Moldova—raising fears of a false flag attack on Ukrainian territory originating from the west. In the south, Russian forces defended captured territory from Ukrainian counteroffensives with intense artillery fire.

END_OF_DOCUMENT_TOKEN_TO_BE_REPLACED

Russian missiles targeted warehouses and railways in Lviv on 18 April to stall arms shipments from the West as the invasion enters its newest phase. Russia’s offensive is now centered on capturing the Donbas—the region in east Ukraine claimed by pro-Russian separatist republics—in time for Russia’s national Victory Day holiday on May 9. While artillery strikes south of Izyum have attempted to pave the way for Russian ground troops, entrenched Ukrainian forces in the region and poor coordination have so far slowed Russia’s advance.