Watch the recording today to hear from the experts on: 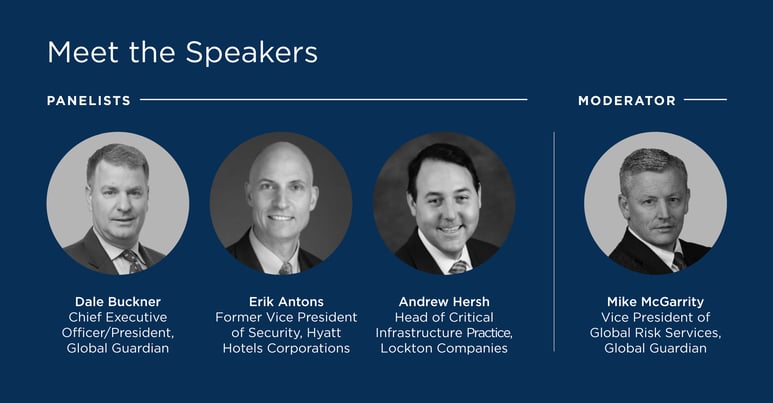 Dale Buckner is the CEO of Global Guardian and has been leading Global Guardian since its inception in March 2012. He is a decorated Combat-Commander with multiple combat tours and classified operations in Iraq, Afghanistan, Colombia, Haiti and Cuba and executed deployments to Russia, El Salvador, Honduras, Chile, Panama, Kuwait, and Qatar. Dale served in the United States Army Infantry (9 years), Military Intelligence (2 years), and Special Forces Green Berets (13 years). He commanded 5 organizations including an Infantry Reconnaissance Platoon, Special Forces Scuba Team, Special Force Counter-Terrorism Team, a Special Forces Counter-Terrorism Task Force, and a Special Troops Battalion. Dale has Bachelor’s Degrees in Criminal Justice and Business, Master’s Degrees in Public Administration and Business Administration, a Masters Certificate in  Strategic Leadership from Cornell and was a Senior Fellow at the Tufts University School of Law and Diplomacy. Dale earned a total of 27 awards and decorations highlighted by his combat Bronze Star Medal and Defense Meritorious Service Medal.

Erik Antons is a Global Security Executive with experience with multiple Fortune 500 companies. In his most recent roles with Hyatt Hotels Corporation and Sempra, Erik supported the corporate security departments, including the international business units, where he was responsible for advising senior management on international security issues, managing the risk of executives and members of the Board of Directors, and was charged with the security of all special events. Prior to that, Erik had a successful career as a special agent with the Diplomatic Security Service, U.S. Department of State, where he protected the people, property and information of Americans overseas, often in critical-threat environments. He also spent 12 years in the private sector as the director of an international adventure travel company and as a private real estate investor, something he continues to do on a part-time basis today. Erik is an ASIS International Certified Protection Professional (CPP) and Physical Security Professional (PSP) where he also serves on the national Council for Global Terrorism, Political Instability and International Crime and on the board of directors for the ASIS International San Diego Chapter. He’s Co-Chair of the Overseas Security Advisory Council Energy Security Working Group, served as Chair of the OSAC Threats and Risks to Personnel and Assets Committee, is a veteran infantryman of the Army National Guard, and speaks Spanish. Erik holds a B.S. Journalism from Ohio University and is a M.S. in Homeland Security from San Diego State University.

Andrew heads Lockton’s Critical Infrastructure Practice, focused on making businesses more resilient and responsive and optimizing insurance coverages around these capabilities. Currently, Andrew oversees Lockton’s partnership with Global Guardian, and the alignment of client insurance coverages around Global Guardian’s capabilities. He has led preparedness and response teams and programs across multiple platforms and clients, is an advisor to businesses and governments around the world and is an appointed member to the Infrastructure Advisory Committee to the State of NJ Office of Homeland Security & Preparedness. Andrew is a member of Business Executives for National Security, Appointed to Resiliency and Cyber & Tech Committees and Senior Fellow at George Washington University Center for Cyber & Homeland Security, and The McCrary Institute at Auburn.

Michael McGarrity is a twenty three year veteran of the FBI and most recently was the Assistant Director of the FBI’s Counterterrorism Division, a position he held since February 2018. As Assistant Director of the FBI Counterterrorism Division he led all FBI counterterrorism investigations in the US and abroad. Mike served as the Special Agent in Charge of the Criminal Division of the New York Field Office where he led all criminal investigations in the FBI’s largest field office. As the Special Agent in Charge he led multiple task forces which assisted in bringing significant reductions in violent crime in New York City. During his tenure he led investigative teams that also brought substantial public corruption, white collar, and security fraud investigations and prosecutions. Before joining the FBI, Mike was an Assistant District Attorney in the New York County District Attorney’s Office in New York City and previously worked in the oil and gas industry. He obtained his law degree magna cum laude and undergraduate degree in economics from The Catholic University of America. He is a graduate of both Harvard University’s Kennedy School of Government Senior Executive Program in National Security and Northwestern University’s Kellogg School of Management Strategic Change Program.