The storms are not expected to be of the same intensity as in 2020, which witnessed a record-breaking 30 named storms. 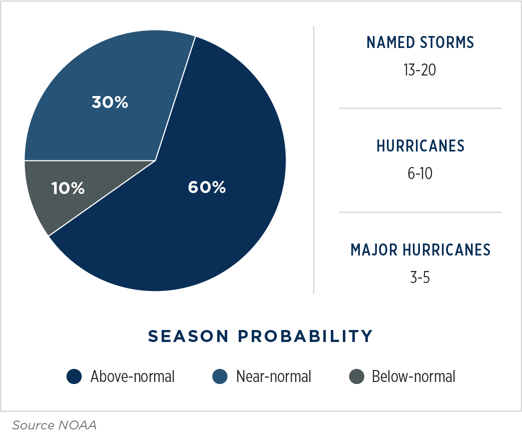 That year, the usual 21-name Atlantic list was quickly exhausted during the busy storm season and for only the second time in history, the Greek alphabet was used for the remainder of the season. This year, NOAA expects 13 to 20 named storms (winds of 39 mph or higher), of which 6 to 10 could become hurricanes (winds of 74 mph or higher), including 3 to 5 major hurricanes (category 3, 4 or 5; with winds of 111 mph or higher).

Ben Friedman, NOAA’s acting administrator, says: “Although NOAA scientists don’t expect this season to be as busy as last year, it only takes one storm to devastate a community.”

At Global Guardian, we believe that response time is critical in times of crisis. A quick and efficient response can not only reduce damage, it can also reduce cost.

"Although NOAA scientists don’t expect this season to be as busy as last year, it only takes one storm to devastate a community"

The following factors are responsible for the above-normal forecast:

A combination of all of the above factors mean the likelihood of big (and potentially devastating) storms this hurricane season.

A LOOK AT OUR KEY CAPABILITIES

RESPONSE YOU CAN RELY ON

Communications: In a major weather event, communications are one of the first casualties, making it hard to coordinate search-and-rescue operations. Our team is equipped with satellite phones, trackers, and BGAN terminals that can supply Wi-Fi and a phone line to up to 10 users.

Security Response: With one phone call to our 24/7 Operations Center, highly-trained, dedicated armed or unarmed agents can be deployed on the ground to secure a client’s site, prevent theft, and ensure a safe environment that is conducive to recovery efforts.

Medical Support: Our teams include deployable medics, telemedicine capabilities, and search-and-rescue paramedics. We deploy at least one medical personnel in our response to storms given the likelihood that healthcare services will be under severe strain in the wake of a natural disaster.

Relief and Supplies: Emergency food, equipment, and supply delivery can be arranged with urgency. Our expertise in navigating the international permit process, paired with our access to diverse aircraft options, allows us to provide support and relief faster than our competitors.

Emergency Aviation: Our pilots operate a variety of aircraft to assess storm damage, deliver critical supplies, secure sites, and provide medical assistance or evacuation services. Our aviation team is able to coordinate transport for large assets, as well as other tailored aviation services to provide cost-effective transport that fits any timeline.

Drone Site Assessments: Our drones are fitted with a speaker, spotlight, thermal camera, and regular camera, which gives them the ability to carry out damage assessments and surveys, search and rescue, and provide security, especially to areas that have been cut off by the storm.

Power Generators: When critical power is lost, temporary power needs to be supplied in short order. Global Guardian can deploy and transport equipment at a moment’s notice. Our team of professionals have the ability to stabilize any emergency situation and get systems back up and running.

Shelter: Our teams follow strict pandemic protocols. These include limits on the number of people allowed in storm shelters and the use of personal protective equipment (PPE).

NOAA has sounded the warning for this year’s hurricane season. It is time to heed that warning. With large parts of the world still in the grips of the COVID-19 pandemic, it is important to prepare and plan well in advance of a natural disaster. A spike in infections and deaths could complicate relief and recovery efforts during a hurricane. Individuals and businesses should prepare their hurricane emergency plans and procure supplies now in order to avoid difficulties when supply lines are inevitably disrupted and there is a run on whatever little is available.

For a link to the CDC Hurricane Preparedness guide, click here.

Preparation Checklist and Considerations
Preparation is key to ensuring your emergency response plans are well executed in the event of a hurricane. Global Guardian's preparation checklist outlines advice to consider and supplies to gather as you prepare for hurricane season. Download Now

Standing By to Support

In the event you or your company need support during Hurricane Season, Global Guardian provides comprehensive emergency response support including evacuation by air or sea, tele-medical support, crisis response, real-time intelligence, physical security, and CCTV monitoring to keep your assets safe in the wake of disaster.

To request security or assistance with any of the above services, contact our 24/7 Operations Center by emailing us at operationscenter@globalguardian.com or calling + 1 (703)-566-9463.

Mapping the Threat Landscape: CEOs and Their Companies Face a Surge in Physical and Digital Threats

Threats—physical as well as digital—to CEOs, their employees, and their businesses in the United States have grown exponentially over the past few years, fueled by a...

Navigating Today's Security Landscape: How Businesses Can Be More Resilient in These Challenging Times

A combination of a pandemic, global warming, cyberattacks, and rising crime in the United States is posing a challenge to businesses that is unlikely to abate anytime soon.

A Response Network in 125+ Countries Gives Global Guardian its Edge

On the night of November 13, 2015, gunmen and suicide bombers launched coordinated attacks on the Bataclan concert hall; the Stade de France, a major stadium; and restaurants...